The RetroTek-M is a mobile pavement retroreflectometer for measuring the coefficient of retroreflected luminance (RL) of road markings. 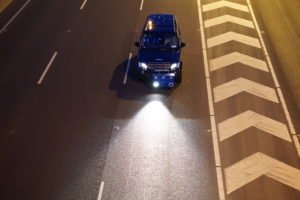 RetroTek-M makes the most of being mobile

“With its ability to simultaneously measure the lines on both sides of a lane to EN1436, the RetroTek-M is the most efficient and versatile mobile retroreflectometer system on the market,” said Joe Turley, chief executive of RMS.

The RetroTek-M performed within +4.08%/-3.69% of a LTL-XL handheld device, as noted in a report by Hans-Hubert Meseberg, chairman of the German association StrAus-Zert, a government-approved evaluator of equipment for use on German roads. This is well within ± 7.5% demanded by the German Federal Highway Research Institute. When averaged over all of the samples taken, the RetroTek-M reported nearly identical readings to the handheld LTL-XL.

Meseberg also said that he observed the performance of the RetroTek-M was not affected by the velocity at which the measurements were taken at. The RetroTek-M Mobile Pavement Retroreflectometer is “deemed well suitable for dynamic measurement of the coefficient of retroreflected luminance RL of road markings according to … European Standard EN1436 and delivers the same results as a portable reflectometer [while being] independent of measuring speed [and] the kind or form of the road marking”.

This project has received funding from the European Union’s Horizon 2020 research and innovation programme.