Retroreflectivity is only going to become more important for highways authorities:

Jon Masters reviews some of this year’s major developments 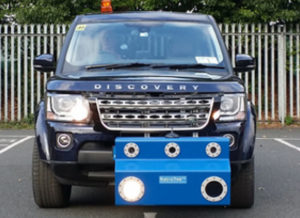 “Measurement of the retroreflectivity of traffic signs and road markings – the amount of light that is reflected directly back from its source at any angle – is only likely to become more important for highways authorities. There is the pressing need to maintain levels of safety at night, particularly so where streetlighting is being reduced to save on energy consumption. Plus, retroreflection may well become critical for guidance systems of autonomous vehicles.

“Technology is now available for regular monitoring of the retroreflectivity of road markings, safely and economically at traffic speed and with no interference to traffic flows, according to manufacturer RMS (Reflective Measurement Systems).
Attached to the front of a testing vehicle, its new product RetroTek-M can simultaneously survey six streams of data in a single pass. In other words it can measure the retroreflectivity of multiple longitudinal and transverse lines and objects.

It uses sophisticated machine vision cameras and software to locate markings and objects for surveying. RMS says cameras capture images of full lane width, illuminated by a projected light source in a geometry conforming to the relevant standards EN1463 and ASTM E1710. Precision driving in close proximity to road markings or reflective pavement markings (RPMs) / road studs is not needed, the company adds.

RMS launched the RetroTek-M traffic speed retroreflectometer in late 2015. The company has also developed the RetroTekView suite of reporting software for single and multiple surveys, plus an online interactive survey management tool.”